Facebook has become THE social network. There's even a movie telling it's story. This does not stop Google from attacking Facebook. They actually already made an attempt a couple years ago with Orkut. At least here in Switzerland this was a total failur. I can't think of anybody who was actually using it. Just two or three days ago Google launched the private beta "Google+". Google's Social Network. Basicially it's Facebook but nicer and with a better concept for privacy. Plus you can actually export your Data!!!! This is really amazing. So I just exported all of my images from Picasa Web as zip file!

What people say about Google+ 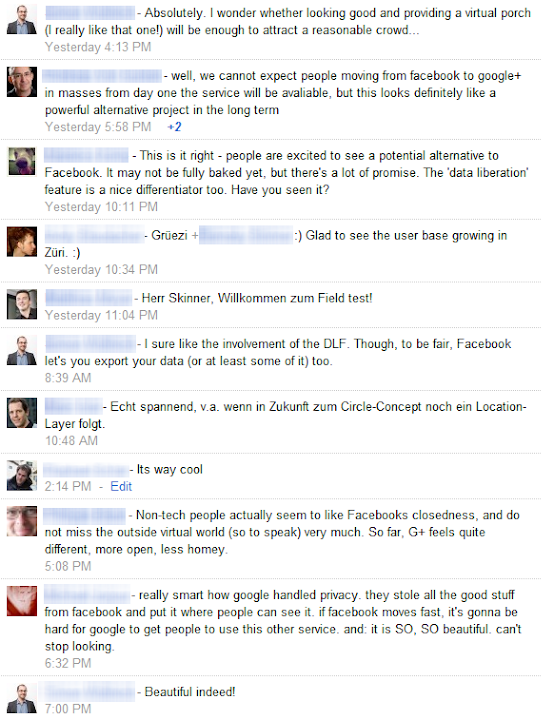 Beatiful. There are some really nice UI features. What you know from Facebook as lists are Circles in Google+. Adding people to Circles happens via drag an drop. Looking into circles is really cool too. Google+ looks very refreshing. Google+ looks very clean. In the past couple of months I started to worry about what I share with people on Facebook. Mostly it was just either friends/not friends. Yes they were lists, but somehow I never got around figuring out how they actually work. In Google+ circles very central. You actually have to use them. Very cool. When posting something you can choose between your circles or/and posting to the public just like Twitter. Awesome!

It's only by invitation. You can leave your e-mail address with Google and then they might invite you. I would like to give away some but Google has disabled the functionality 🙁 I'm sorry. I was one of the lucky one who could actually get one from a friend, but I can't give any… this will though change 😉 Be patient and bare with Facebook.